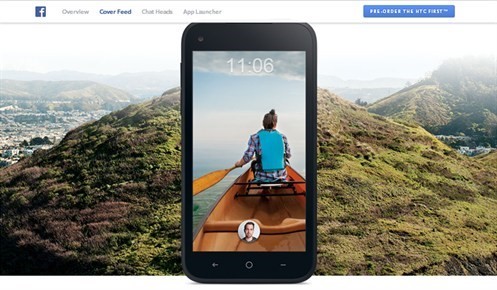 After months of speculation, Facebook announced yesterday that it was launching a phone. But unlike what previous speculation suggested, it’s not a Facebook handset or OS. Instead, Facebook Home is a new home screen and app launcher interface for Android, putting Facebook updates at the forefront of the phone experience. As Zuckerberg himself said, Facebook Home “puts people first instead of apps.”

Two of the key attributes of Facebook Home are: Cover Feed – the very Facebook-esque name for the default home and lock screen which displays News Feed updates focusing on what your friends are sharing. Chat Heads – the messaging feature working with SMS and Facebook Messenger, enabling users to read and respond to messages while using other apps, without actually having to navigate out of the app they were previously using.

The announcement addresses a few problems which Facebook has faced in the mobile space in the past, as it encourages more people to spend more time using Facebook on their mobile phones. Additionally, there’s potential for Facebook to present its mobile users with advertisements more easily. Although it’s not clear at this stage whether Facebook will try to push advertising messages on the “Cover Feed” (or anywhere else on the interface for that matter), there’s certainly an opportunity for this to happen. Whether it’ll be a wise move is a different matter – it would likely irritate users and possibly deter them from using Facebook Home.

I think the clever thing Facebook has done here is not try to become another phone manufacturer. It would probably have failed in that space through lack of scale and expertise. Instead, Facebook is bringing its social network to the forefront of people’s activities, and becoming more central in their lives; a great competitive move.