Marketing to developers – who they are, what they value, and how we can talk to them

Developers have been the cornerstone of technological advancement since the dawn of the internet, and with each new unveiling of a great app and each new software update, the rest of us are reminded what a unique and valuable group of people they are.

But what about for the rest of us: marketers, writers, project managers, and media pros, whose job it is to sell ideas? How do we engage with developers, support them, sell to them, and most importantly, speak to them in a way that doesn’t drive them running in the other direction?

As is easy to forget when talking about a specific audience, developers are people. Many of them do fall into certain personality categories, and a lot of the research and study we have done on developers indicates distinct commonalities in their habits and preferences. But at the end of the day they are just people who want to be shown something of value.

With that in mind, let’s explore the ‘developer’ profile.

Who they are and what they want

Metia conducted a detailed study on developers earlier this year to get a better understanding of them, as a group. We asked 100 developers their opinions on programs that served them. The report we conducted is summarized below, and it is also free on our site as a downloadable pdf. (Provided you also include your email!)

While there was a lot of information to wade through, the bottom line is that developers have a set of preferences that can make them resistant to typical marketing methods. They are an extremely practical, straight-forward, and analytical group. Developers want to know ‘how’ and ‘why’ something works and they want to get right to the point. Sure, they’re interested in theory, but they’re most interested in application of their theories. Makes sense, right?

Guess what else? There’s this stereotypical idea that developers are predominantly young twenty-somethings, which can skew the way we speak to them. But as the chart below shows, the largest group of developers are in their thirties and forties, though demographics are indeed shifting. Age and maturity level are things to keep in mind when choosing language tone, graphics, and the overall approach you take to speaking to developers. 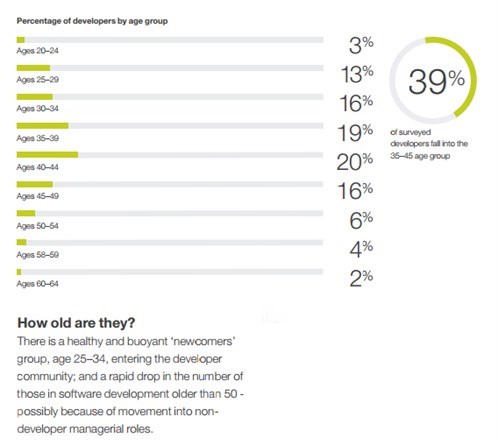 A real-world lesson from marketing to developers: don’t make it too pretty, focus on content

It’s all well and good to make note of developers’ profiles, but it’s even better to study how other marketing masters have managed to get through to this marketing-wary group.

Joe Chernov is the VP of Marketing for Kinvey, a mobile backend as a service start-up in Cambridge, MA, and had an eye-opening experiencewhen marketing to developers. He writes:

“Back in early November, we produced a hand-illustrated presentation – as beautiful as anything I produced in my past role – on the impact mobile technology played in helping people prepare for and combat Hurricane Sandy. Although the presentation enjoyed more than 40,000 views, it was marketers – marketers at SlideShare, marketers at design firms, and marketers at content agencies that drove the attention. Our developer audience never took notice.

More recently we published an infographic titled “How long does it take to build a native mobile app?” It was featured on the homepage of ReadWriteWeb for two full days, which, as you would imagine, drove a busload of traffic to our website. And, unlike the Hurricane Sandy presentation, developers took notice. While most cheered the graphic for answering a real-world question, a few immediately found weaknesses in some of the research and questioned the methodology. In some cases, the infographic’s attractiveness backfired – in fact one skeptical commenter on a software development blog damned marketers for “putting pretty pictures in front of us.”

One of the most successful marketers in the development community: how she did it

Another real-world example comes from Danielle Morrill, Director of Marketing at Twilio, who grew her company’s developer community from a few hundred to more than 100,000 developers.

The entire video recording of how she did it is here, but I’ve summarized key ideas and quotes below:

“The counter-intuitive thing is that more than any other audience, developers want to be treated like people because they are people first of all. But secondly because everyone else who markets them treats them like numbers.”

“If the first newsletter is full of really useful resources and links, people will save it and they'll come back to it. We found this a lot. We found trailing open rates of months on that first email that we would send out for Twilio.”

“The cool thing is that if you republish content, then you can battle this mistake that's so commonly made by just republishing the noob stuff because that's the stuff you usually publish first.”

Tying it all together

So, what does this mean in condensed form? If you want to speak to developers in a way that will foster a healthy relationship with them, consider focusing on these key points: 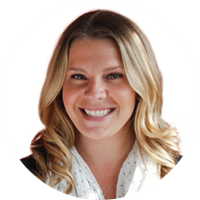