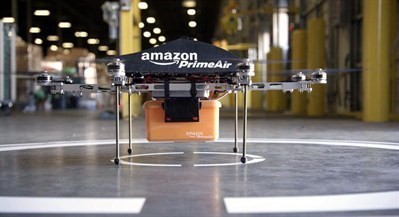 Robots have been around for years. When I was a child, I asked my parents for a robotic dog for Christmas almost every year. I never got one, instead I had to make do with my real pooch.

This week Amazon announced it was testing a drone delivery service which would deliver packages weighing up to 2.3kg to customers within 30 minutes of their order being placed. The idea definitely has the “wow” factor, especially when you realise that the drones have no environmental awareness so might end up flying into people and other objects.

Almost as if in response to Amazon’s announcement, Google has also revealed that it has acquired seven robotics companies in the past 18 months. Google’s robots, as this BBC article reveals, could be paired with its self-driving car research to automate the delivery of goods.

But are we ready to trust robots with our packages? I for one am a bit sceptical. The ideas are great, but on occasion I still have trouble trusting the traditional postal service with my letters and parcels.

Robots can be used for so much more than dropping presents from the sky; there have been reports that Google has patented a robot which could help with your social media – interesting. One of the key ideas behind social is interaction – with our friends, brands and even complete strangers. Although we might not be in the same room as these people (they may even be on the other side of the world), in the majority of cases we know the ‘person’ we’re interacting with is likely to be a genuine human being.

What Google is working towards, is some software which mimics how you would engage with social media – your updates and messages to friends. So, when you send a message to your best pal, the response might actually come from a robot.

Automation on social media isn’t really a new concept; the majority of Twitter users have probably fallen victim to a spam bot at some stage, and there are even brands who have been accused of automating their responses to customers on social media.

It’s interesting to think that a few years down the line a robot might know enough about us and how we interact that it could start imitating us online at an individual level. When you think about the amount of information companies know about us through the data we share on social media, it’s not really surprising that robots could soon start impersonating us. Brands currently use the extensive amount of social data we share to push advertisements to us, so why not use this information in such a way that might actually help us out? As people become busier, the amount of time we can commit to social media might start to decline, so having a robot do the handy work for us might be a useful thing.

But I still think there’s a long way to go. There are already applications out there which, once connected to our Facebook or Twitter profile, analyse our updates and spews something out which is supposed to be something we might say. Just the other week I played with ‘What would I say?” – an app which generates a Facebook status designed to sound like you. I was unimpressed with what it churned out.

My final thought on the matter is that if we let robots handle our social media for us, are we becoming more secluded as individuals? Thanks to social media, the level of face-to-face interaction we have with friends and family has decreased dramatically. If we then leave our social media in the hands of a robot, we could go for days/weeks/months without actually speaking to our friends. While the relationship would technically still be there, in theory it would be a lot less personal.