Metia and Dell win Astrid award for Excellence in Design

SEATTLE – Metia Group, a global B2B marketing agency, announced that it has won the award for Excellence in Design for the Dell Annual Report for Customers, presented by the Astrid Awards 2016.

The Astrid Award, celebrating its twenty-sixth year, highlights creativity, craft innovation and originality in design. The program is established to recognize and reward the best in international design communications and to recognize the most successful and influential creative talent.

Andrew Martin, President Metia, comments: “Annual reports should communicate what matters, and customers matter most of all. Dell understands the standout importance of customers. Liberated from the regulatory requirements of being a public company, we were tasked with helping Dell create a new style of annual report, one that is focused 100 percent on their customers.”

Collaborating closely with Dell’s in-house communication and digital strategy teams, Metia built a mobile-optimized digital experience that showcased 52 key statistics – each statistic presenting a new story for each week of the year.

Each of the 52 stats is represented by a single illustration using colorful icons that flip when visitors mouse over them to reveal snippets of interesting content, imagery and video for the customer to interact with.

The resulting Dell Annual Report to Customers illustrates exceptional use of innovation in integrated reporting, creative design, corporate storytelling, media, social interaction and content marketing. It informs the customer about Dell in a fascinating and unique way.

Within the first 48 hours of its release, thousands of unique users viewed the Dell Annual Report to Customers. During the same period the social reach was nearly 4 million people. 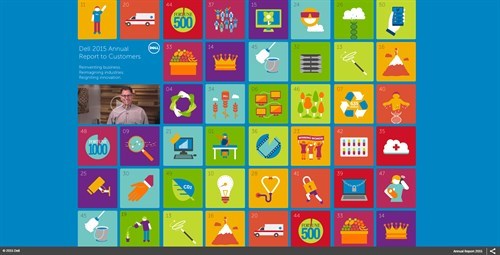