A picture speaks...more than 140 characters

As we edge close towards Twitter’s IPO, the social network has rolled out a few sneaky changes. Some of these are relatively incremental and individually don’t have a huge impact on the user experience. For instance, you can opt to receive Direct Messages from anyone, and users of Twitter’s advertising platform can schedule tweets to go out at a later date/time. 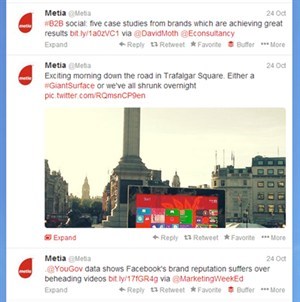 I first noticed this update last night and my initial thought was “a photo, wow!” But after a closer look through my Twitter stream, I began to think how intrusive the photos actually are. Previously, if I saw a link to a twitpic I would click on it if I felt it would interest me, having read the accompanying tweet. Now, I have no choice, and my Twitter feed is filled with a lot of content which quite frankly has no interest to me – re-tweets from my followers, for example.

It seems I’m not alone. Twitter has received quite a bit of backlash around the update, especially from users of its iOS and Android apps which also saw the update. The content displayed on mobile apps is already quite limited, and the automatic display of images and videos only reduces this more. Not a great user experience.

Some have argued Twitter’s update feels very Instagram-esque, and for me Twitter’s new focus on images and videos seems to mirror Facebook’s new “visual strategy”. But as we’re well aware, what works on one social media platform, won’t necessarily work on another – just look at Facebook’s hashtags for proof of that.

I’m sorry to say it, but what displeases us users generally pleases brands and advertisers. Not only do images usually receive a higher level of engagement than text-only posts, advertisers will also revel in the fact their nice swanky images are automatically displayed in the users face. There’s no need to entice a user with a carefully crafted accompanying tweet, as it’s likely the user will see the image before the tweet anyway, as someone I follow quite brilliantly pointed out: 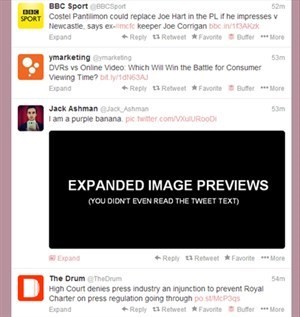 It’s clear why Twitter would want to draw in more advertisers ahead of its IPO, but I’m not sure Twitter has really thought this one through. I may be being a bit cynical here, but advertisers might start to abuse the update, and start using images more as a means of advertising than anything else. This could hurt Twitter’s ad model. The images are highly visible, and difficult for Twitter users to ignore or avoid (unless they disable the functionality), so advertisers who prefer to not to play by the book may try to push advertising messages to users through images, rather than using Twitter’s ad model.

My final thought on this is: is it de-valuing Twitter’s business model? The tweet is Twitter’s unique selling point – a 140 character piece of text which has been embraced by consumers and brands globally, and transformed the way we communicate, do business and read news. Now, users are more likely to be drawn to the image first, and the tweet second. In some cases, it might make the tweet entirely redundant.

A tweet may only be 140 characters, but a picture is worth a thousand words.