Video games are big business, with the global gaming industry forecast to generate $159bn in revenue this year – from a projected market of 2.7bn gamers. These figures are growing each year, yet marketers’ understanding of gamers isn’t keeping pace. Gaming is undoubtedly now a mainstream activity, however brands are failing to engage with what is a highly invested, active audience. As the average age of gamers increases and technology allows better audience access, we’re seeing greater opportunity to reach the demographics with the highest spending power, but if marketers continue to misunderstand who gamers really are, they will remain untapped.

The current attitude among advertisers seems to be that video games are for teenage boys. A recent article on The Drum, however, highlights how wrong this view is. The average age of a gamer is in fact 35 years old, while at least 46% of gamers are female – and the majority of gamers are medium-to-high earners with full-time jobs.

The scale of gaming growth is also mind-boggling. Microsoft recently sold the 200 millionth copy of its best-selling game Minecraft, while the global audience for esports is forecast to reach 495 million viewers this year – nearly five times the viewership of 2019’s Super Bowl.

So why aren’t we seeing brands engage?

A new video game release from developer Mediatonic provides an example of this failure. Fall Guys, released in early August on PlayStation 4 and PC, has taken the gaming world by storm. On day one of the Fall Guys launch, 1.5 million people logged in to play. The game has since sold over 7 million copies on PC platform Steam and has become the most downloaded PlayStation Plus game of all time, and this all less than a month after launch.

The game is proving successful for viewers too: in the first week after launch viewers on Twitch watched more than 23 million hours of gameplay.

In short, Fall Guys presents an enormous opportunity for brands – but it’s an opportunity that is mostly being ignored.

This is demonstrated by a charity auction Mediatonic is running, offering the opportunity for brands to create their own costume for players to wear in-game. Proceeds of the auction will go to Special Effect, a charity that uses video games and technology to enhance the quality of life of people with disabilities. A fantastic opportunity to reach a highly engaged audience with money going to a good cause – it’s a win-win.

But while bidding reached $1,000,000, large consumer brands were absent. Professional streamers Ninja and MrBeast joined forces with Aim Lab, an analytics platform that helps players improve their aim in video games, and G2 Esports, a German-based esports organization to place their successful bid. This feels like a missed opportunity. 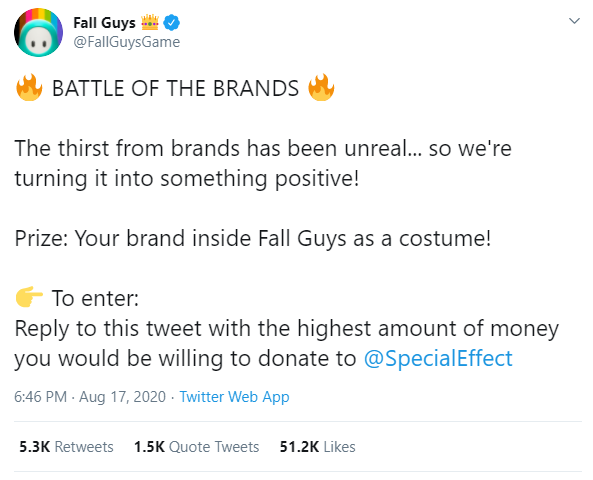 An established yet under-served platform

In-game advertising isn’t a new phenomenon. Sports games are well known for emulating the billboards found in real-life stadiums and brands have had products placed in games, for example Mercedes having a range of its vehicles made available in Mario Kart. There are a growing range of in-game advertising platforms becoming available, allowing advertisers to serve ads in native spaces. We’ve also seen increased interest in esports sponsorship. American Express and Coca-Cola were known for sponsoring League of Legends tournaments even in the earlier days of esports. IKEA and Animal Crossing have also announced a brand partnership which will be one to watch.

But as a platform, video games haven’t taken hold with advertisers in the same way television, radio and even video on demand have. There’s a place for advertising in video games, but the quality bar is undoubtedly higher. You can’t wedge products between episodes like you can with TV, advertising must be a more considered part of the experience – particularly as gamers are often protective of their hobby. But with greater effort comes greater rewards, and the chance to tap into a highly engaged audience shouldn’t be overlooked. If I was a marketing manager for a large consumer brand, I’d be chomping at the bit if an opportunity like the Fall Guys charity auction fell into my lap.