Will the Facebook machine steamroll LinkedIn in the enterprise?

As far as the consumer world goes, Facebook dominates social networking. Much of the world uses Facebook services to talk and stay in touch with each other, exchanging messages, posting status updates, sharing videos and receiving notifications. With the purchase of Whatsapp, it also got a hold of real-time instant messaging.

But one thing Facebook misses is a hold on the workplace. Sure, people use it at work all the time, but as an actual enterprise social networking and collaboration tool it's not looked upon as a suitable option. Businesses both big and small instead look towards applications such as LinkedIn, Yammer and Microsoft Exchange to get employees working with each other.

But according to reports, Facebook is looking to shake things up with a new service called 'Facebook at Work' in early January, a product which allows employees to communicate and collaborate on projects. The details are being finalised, but this announcement has naturally caused a stir.

The first area to think about with a potential Facebook offering is what it might mean for the enterprise communication space, where companies like LinkedIn and Yammer dominate. At the moment there is a definite divide between personal and professional networking – people 'friend' each other on these networks for very different reasons.

Also even though Facebook has its uses in the workplace (the running of company pages, paid advertising/marketing etc…), many businesses still regard it as a time waster – on many company networks it's actually banned for security and productivity reasons.

But it's understandable that Facebook wants to take a piece of this enterprise pie. One of the big advantages it has over competitors is in its huge user base – Facebook has around 1.35 billion monthly active users, compared to LinkedIn comparatively small 90 million.

So if Facebook can get even a small proportion of its members using an own-branded workplace-orientated networking tool, it will have a pretty big market share. 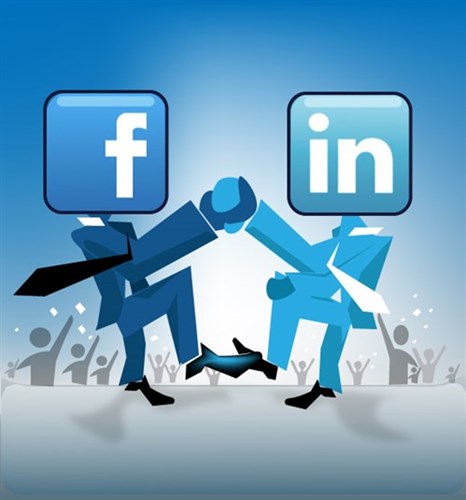 This is an area which would elevate Facebook above LinkedIn as simply just a networking tool, and more as a useful cloud software option in direct competition with collaboration tools such as Microsoft Office 365 and Google Drive.

The use of the cloud for office software is still quite small, but is growing fast thanks to increasing adoption by small to medium sized business. If Facebook at Work was to integrate cloud-based document collaboration, and made it available for free, it would be at a distinct advantage as people are so used to the way Facebook works.

This is the million dollar question. Facebook has the familiarity – but does it have the trust? The social network has had issues with security in the past, and that could stop businesses taking it up as a collaboration tool ahead of trusted alternatives from Microsoft and Google.

Facebook at Work is probably an easier sell as a replacement for LinkedIn rather than enterprise software competitor. It can offer all the functionality that LinkedIn does (newsfeed, groups, communities, messaging etc…), and importantly, it has the knowhow, user base and funding to really dominate (with the amount of revenue it generates, Facebook could offer the premium services that LinkedIn does for free).

And if that doesn’t work, it wouldn’t be a surprise to see Facebook do with LinkedIn what it has with services like Instagram (for image sharing), and WhatsApp (for messaging). That is, to buy the property outright. It has the cash to do this, and if it’s something which will work for shareholders, it’s a naturally easy option.