COVID-19 has highlighted the need to better protect the world against future health emergencies. The Trinity Challenge answers that call, bringing together the best and brightest minds across a range of disciplines, with a single aim: to develop solutions using data science and analytics, to enhance pandemic preparedness and disease surveillance. These solutions would enable us to be more effective in managing the next pandemic. Early in its development, the founders of The Trinity Challenge asked Metia Group to help achieve this bold ambition.

Potential participants would be attracted by the Challenge categories, the incentive of a share in a £6 million prize fund, and the unique opportunity to be mentored by, and to work alongside world leading experts from academia, science, technology and commerce.

But first, The Trinity Challenge sought a brand identity that expressed its data-led, analytical approach to better identifying, responding to, and recovering from the next pandemic. This brand identity needed to appeal to participants from the social sector, technology, academia, healthcare and philanthropy, while also representing The Trinity Challenge’s founding principles of inclusivity, collaboration and innovation.

The first objective was to enlist a core group of 20 institutions from diverse sectors as Founding Members; and the second, was to receive 100 applications from individuals and organizations who would work with these members, to bring their ideas to life.

Metia Group joined The Trinity Challenge as a Founding Member and Digital Partner, with a brief to create a new brand and establish its digital presence.

A new identity with a purpose drawn from history

The Metia team then embarked on a factfinding mission to explore the question: “how has data innovation previously informed healthcare advances?”

Through its strong links with Trinity College, Cambridge, and the scientific and medical fraternity, The Trinity Challenge has access to an abundance of healthcare, mathematical and statistical knowledge. The history embodied within the walls of Trinity College pointed towards Florence Nightingale, one of the founders of modern nursing principles and – as is less well-known – also a statistician, who used data to inform health strategies.

After establishing her nursing credentials during the Crimean War of the 1850s, Nightingale published “Notes on Matters Affecting the Health, Efficiency, and Hospital Administration of the British Army”, featuring a statistical graphic titled: "Diagram of the Causes of Mortality in the Army of the East". It was a landmark moment in scientific communications, due to its combined use of data and graphics to convey clear and simple information.

The graphic illustrated how epidemic disease accounted for far more deaths than battlefield wounds – deaths that could be prevented by factors such as better nutrition, ventilation, and shelter. Known as Nightingale's "Rose Diagram”, it was a pivotal moment for the use of data in healthcare. Now known as a coxcomb diagram, it’s a clear and persuasive visualization of complex data. 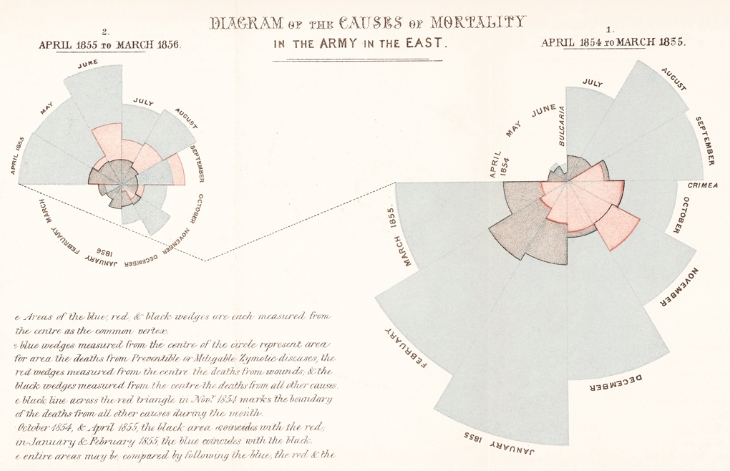 The Rose Diagram inspired The Trinity Challenge identity. With strong links to data, statistics, healthcare and the campaigning work of Florence Nightingale, it supports the innovative and collaborative ethos of The Trinity Challenge, and aligns with its vision – leveraging data and analytics to enable better pandemic preparedness.

With the logo created and a brand identity established, the Metia team developed brand guidelines, outlining the essential elements of The Trinity Challenge’s identity system and the brand’s core creative principles. This included direction on color, typography, photography and graphic design elements.

Imagery needed to cover all potential pandemic scenarios, to represent the long-term goals of The Trinity Challenge beyond COVID-19. It needed to inspire, to provide positivity and hope for a future where pandemics could be identified and halted quickly and efficiently. Most of all, it needed to be representative of the global audience with which The Trinity Challenge would engage, so great care was taken to ensure that the photography was inclusive.

Using these brand guidelines, the Metia team developed a website for The Trinity Challenge and created a supporting suite of assets used across digital channels, including social media and virtual events. The brand has also been applied to presentation decks, data sheets and video executions.

The Metia Demand team then helped to generate awareness through highly targeted, paid media campaigns, leveraging The Trinity Challenge brand across both paid social and search.

At the time of its launch in September 2020, The Trinity Challenge had a coalition of 22 founding members, including: Google, Facebook, The Bill and Melinda Gates Foundation, GlaxoSmithKline, Microsoft, McKinsey, Reckitt Benckiser, Tencent, Legal & General, Aviva, Imperial College London, HKU Med, London School of Economics, Northeastern University and the University of Cambridge.

“The Trinity Challenge has gathered immense momentum in just 12 months,” commented, Professor Dame Sally Davies, Chair of the Board of Trustees, The Trinity Challenge. “The foundations laid by Metia in creating our brand identity and establishing our digital presence have helped accelerate awareness and participation in the Challenge. We have exceeded all our early goals and look forward to the future development of the Challenge with confidence.”

By May 2021, a further 18 organizations had joined the coalition; moreover, The Trinity Challenge had amassed a pledged prize fund of £6 million, which would be shared by the winning solutions. The teams were based in, or operating from countries such as The Philippines, Thailand, India, Kenya and Nigeria. The winners stood to receive up to £2m each, to help them develop, scale and deploy their solutions.

The Awards Ceremony on 25 June 2021 was a truly global event, at which the trailblazing and creative solutions from 16 finalists were recognized. Of these, eight winning teams now have a chance to turn their ideas into reality, to make a significant, positive impact on the health of millions around the world.

The Trinity Challenge has gathered immense momentum in just 12 months. The foundations laid by Metia in creating our brand identity and establishing our digital presence have helped accelerate awareness and participation in the Challenge. We have exceeded all our early goals and look forward to the future development of the Challenge with confidence.

Dame Sally Davies
Chair of the Board of Trustees, The Trinity Challenge